Steffan Rhodri is starring in Alan Ayckbourn's 'Absent Friends' at the Harold Pinter Theatre until April 14th. The play sees a group of friends trying their best to comfort a friend who loses his fiancée but instead end up arguing about their own problems.

Check out Steffan's turtle neck too, reason enough to go and see we thinks. The show has been getting some pretty darn tooting reviews too, heres one from The Guardian’s Michael Billington;

“It is fascinating to see a new generation of directors and actors discover Alan Ayckbourn. And, even if the National came badly unstuck with Season's Greetings, Jeremy Herrin is bang on the money with his revival of this much less familiar piece from 1974. There are times when you are caught between laughter and tears in a way that makes comparisons with Chekhov seem far from fanciful.

Ayckbourn is here writing, not for the last time, about the innocent destructiveness of the well-intentioned: the agent of chaos on this occasion is the bereaved Colin, whose fiancee has lately drowned and for whom his not-so-close friends throw a consolatory tea party. Even the anticipation of Colin's arrival exposes the fractures in the relationships: Diana, the hostess, is convinced that her husband, Paul, is having an affair with one of the guests, Evelyn. For her part, Evelyn is a moodily taciturn young mum tethered to a hopelessly incompetent husband, John. The party is completed by Marge who, lacking a child of her own, becomes surrogate mother to her permanently ailing partner. And when the beaming Colin turns up, Ayckbourn really puts the catalyst amongst the pigeons.

Any budding dramatist could learn a vast amount from the economy and skill with which Ayckbourn sets up the situation. But his craftsmanship and the laughter it generates almost camouflage the acute social observation. He is writing, in part, about our embarrassment in the face of death; and the fact that Colin is clearly the happiest man in the room makes his friends' tongue-tied awkwardness in his presence all the funnier.

But this is also a play about marriage and the way women, in the early 1970s, were often expected to subjugate themselves to the male ego. The pivotal figure, in this respect, is Diana, whom Katherine Parkinson superbly endows with a quality of slowly erupting despair that reminded me of her memorable Masha in a Royal Court Seagull.

But all the performances in this production are finely judged. Kara Tointon has just the right broodiness as the edgy Evelyn, who is like a comic version of the young mother in Edward Bond's Saved. Elizabeth Berrington's Marge meanwhile uses relentless busyness to conceal her own sadness in not having children.

And the men, however impossible, are equally well played. Steffan Rhodri's Paul is the archetypal Ayckbourn male bully, David Armand as the cuckolded John is all restless, arm-waving energy, and Reece Shearsmith as Colin has the bright-eyed bounciness of the truly insensitive.

Because Ayckbourn is always there, and because he has written some 75 plays, we tend to take him for granted. But this play, in which the action takes place in real time, displays not only his technical adroitness but his psychological understanding of the havoc created by the happily well-meaning. It is also fitting to see Ayckbourn staged at the Harold Pinter since the two worked together, had a high regard for each other, and increasingly look like modern masters.”

Read the original article from The Guardian

Here's a website with information and ticket buying pages.

Steffan Rhodri has been voice over artist at Another Tongue voice agency for 2 years. 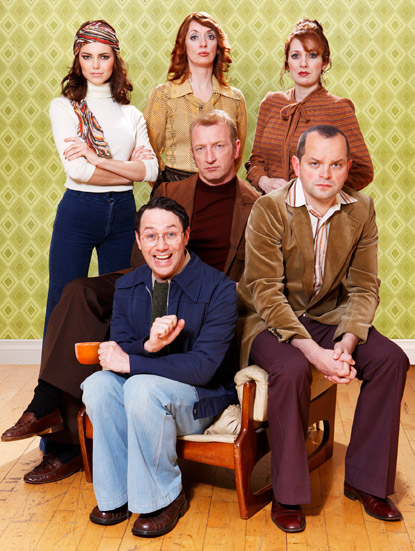