GINA BELLMAN has written an article for The Observer which lifts the lid somewhat on her experiences on US cult show 'Leverage'.

In the article Gina discusses how she discovered the show had been cancelled, shares her favourite fan video and divulges stories of their on-set antics. The show has such a strong a strong fan base it has become the first cancelled TV show to win Favourite Cable TV drama at the People's Choice Awards.

Season five of 'Leverage' starts on Tuesday 5th February at 10pm on Fox.

GINA BELLMAN has been a voice over artist at Another Tongue voice agency for 13 years. 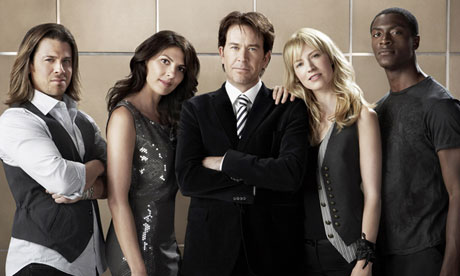 Gina, second from left with cast of Leverage.
share me