And then kindly tells us in fact. A Mumsnet Best Cookbook Award winner in 2011 with her first book ‘Fay’s Family Food’, Fay Ripley has returned with ‘What’s For Dinner’. A collection of 100 recipes intended for regular use, helping with easy week night meals as well as snazzy Sunday lunches.

If fact Mr Cooking himself, Jamie Oliver, describes her book as “No-nonsense, delicious food, great flavours and good ideas” so she must be doing something right.

The lovely journalists at the Mirror caught up with her recently and asked her about her new food based career;

“Fay Ripley: "I'm a bit of a tyrant when it comes to food"

Fronting her own cooking show and selling another book of recipes, actress Fay Ripley has built a whole new career with herself. Here, she explains why she's so fussy about food and why she'd rather be cooking than treading the boards.

Who knew? Actress Fay Ripley is a bit of a tyrant – well, when it comes to food at least.

Not only does her gorgeous husband spend most of his time banished from the ­kitchen, but she’s also sent her young children’s friends home hungry when they didn’t like her fancy food.

“I am very controlling and my husband understands that,” she says.

“He is usually banished from the kitchen. He sometimes gets to cook if I’m really busy, but I’ll tell him what we’re having.

“I won’t let him roam free in the supermarket or with the oven.”

Fay, 45, has cashed in on her love of food with a second career as a TV presenter and food writer.

Her new series, Perfect, has just started on the Good Food Channel and second cookery book What’s For Dinner? is out next month.

But unfortunately for Fay, her passion for food isn’t shared by her husband, Australian actor Daniel Lapaine, and kids Parker, nine, and five-year-old Sonny.

“We have a rule in our house, which is you don’t have to eat it but you do have to try it,” she says.

“Six times out of 10 it works. Although Parker, who was an adventurous eater, has rebelled and now only likes plain food and prefers using her fingers to a fork – she can be quite fussy.

“My five-year-old is easier to feed. Sometimes their friends come round and won’t eat my food, only plain pasta with a squirt of ketchup.

“I’m not prepared to do that. I tell their parents: ‘I’m really sorry, they’re not prepared to eat what I fed them, so you might want to feed them when they get home later’.

“It’s tough. Though I love it when a fussy eater leaves my house grinning because they’ve enjoyed beef burgers made with beetroot.

"They go home and tell their stunned mums because they’re proud they ate them.”

And while they might not be as enthusiastic as she’d like, the former Cold Feet star does try to get her children involved in cooking.

“I cook with them whenever I have time, which isn’t as often as I’d like,” she says.

“I think it’s important to pass on a love of food. I want my children to turn into adults who appreciate that food is a great pleasure of life.

“They love going to restaurants. It’s a fun treat and they know to behave well when they’re out.

“I’m very big on politeness. I would rather they stole than be rude.”

Fay talks about food with an infectious passion, almost more so than she does even acting. “My poor agent,” she says.

“I’ve been selective in my acting work because I’ve been so busy with the food series and books.

She and Daniel, who appears in adventure film Jack the Giant Killer with Bill Nighy this year, celebrated their 10th anniversary with a weekend in Copenhagen in December.

“It was great to get some time together,” she says. “It’s not always easy to balance work with family needs but we manage.

“I make sure there’s always a parent at home and we’re never gone too long from each other.

“Daniel goes to America next month to make a film and it will be hard when he’s away. I’ll miss him but we choose to support each other.

“He’s a fully trained working husband and can take over when I’m not around, too.”

As Fay’s parents separated when she was two, she spent her childhood shuffling between her businessman dad Bev’s home, which he shared with her German stepmother, and her mum Martina’s house, where she lived with her Italian stepdad.

“My family certainly influenced my diet,” she says. “My mum married an Italian and he was one of the first people to import fresh pasta.

“I’d tell friends we were having pasta for dinner but they’d never tried ravioli or fusilli, which made me feel special.”

Fay left home at 17, bought a flat in Streatham, South London, and after three tries won a place at the Guildhall School of Music & Drama, aged 21.

As she struggled to land roles, she took any job to pay her mortgage, including working as children’s entertainer Miss Chief The Clown.

“My 20s were rubbish,” she says. “You struggle to find out who you are and what matters in life, don’t you? Things started to turn around in my 30s.”

She learned to cook out of necessity. “I bought Delia Smith’s big bible with the black cover and worked my way through it – she got me started.

“I love being in my kitchen, testing recipes. My agent sends me theatre jobs but acting every night and two matinees a week seems like really hard work!””

So there you have it, straight from the horse’s mouth, if she cooks it, you darn well better try it! To get your hands on your very own copy of Fay Ripley’s ‘What’s For Dinner’ why not hotfoot it over to Amazon.

Fay Ripley has been voice over artist at Another Tongue voice agency for 12 years. 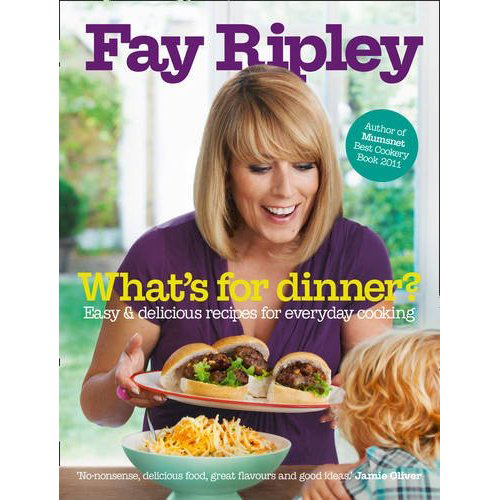